Hawaii Airports and Flying Safety Guide (Informational use only) 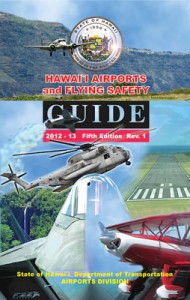 The Hawaii Airports and Flying Safety Guide (2012 – 2013 Fifth Edition Rev 1) is available for download. It is current, as of February 20, 2013. The hardcopy Guide is available at Airport District Offices and the Airports Division. You may request printed copies by email: [email protected] or from the General Aviation Officer, (808) 838-8701

The Guide is published by the State of Hawaii, Department of Transportation Airports Division, in the interest of flight safety and the promotion of aviation in the Hawaiian Islands. In it you will find useful information, including a list of airport facilities, airfield diagrams, operating procedures, traffic patterns, weather and other pertinent data.

Please be aware that the data contained herein is for information only and is not to be used for navigation. This Guide should not be considered a substitute for any official FAA publication such as the Airport/Facilities Directory (AF/D). Please bring any corrections or comments to our attention by contacting the General Aviation Officer at (808) 838-8701 or email [email protected]

UPDATE: Please make note of the changes that should be made for existing printed hard copies.

CHANGE 1. Make the following changes to the HNL Class B chart on p. 73:

CHANGE 2. Replace pages 71 and 72 with the following update to the Honolulu Class B Airspace VFR Departure and Arrival Routes section.

The Airport and the Ae’o

In 1977, Runway 8R/26L or the Reef Runway was constructed as the fourth runway for Honolulu International Airport. It was built to handle the projected increase in passengers and to accommodate the physical requirements of the new jumbo jets. The 12,000 feet runway added needed capacity to the Airport and cost $88 million to construct. However, the new runway was found to destroy the bird habitats of the A’eo bird, an endangered species, and other water birds in the mudflats of Keehi Lagoon. The U.S. Navy offered two areas in Pearl Harbor for the construction of wetlands to save the birds. The Federal Aviation Administration helped with the cost of the mitigation which set a precedent for environmental mitigation in the United States. Because of the joint efforts of the State DOT and DLNR, the FAA, and U.S. Fish and Wildlife the A’eo was saved and has continued to grow in population. 2007 marks the 30 th anniversary of the Reef Runway whose construction has won national engineering achievement awards.

To view and print the Portable Document Files (pdf), you need a copy of the Adobe Acrobat Reader 4.0 or higher. Download a free Reader by clicking on the Get ADOBE READER icon. This will link you to the Adobe web site, where step-by-step instructions are available.