LIHUE – The state Department of Transportation (HDOT), Highways Division, launched the Nawiliwili Road Improvements Project with a groundbreaking ceremony earlier today.  Highway improvements will be made on Nawiliwili Road from Kaumualii Highway to the vicinity of Kanani Street, fronting the busy Kukui Grove Shopping Center, to replace the existing asphalt concrete pavement with more durable Portland Cement Concrete.  Other improvements will include construction of new curbs, sidewalks, gutters and drainage, along with improved road signage, pavement markings and landscaping.

The estimated construction cost is $10.25 million, eighty-percent of which will be provided by federal funds and the remainder by state funds.  Work is anticipated to be complete by the end of the year.  An average of 13,000 vehicles uses this stretch of Nawiliwili Road daily.

This project will continue other major highway improvements in the Lihue area.  In March 2015, HDOT completed the latest segment of the Kaumualii Highway Widening Project, opening the new Lihue Mill Bridge.  This connected to the previously widened segment of Kaumualii Highway, completed in 2012, which extends west to Anonui Road near the Kauai Community College campus. 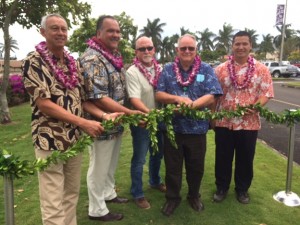