HONOLULU– The Hawaii Department of Transportation (HDOT) advises Oahu motorists of a planned traffic signal outage at the intersection of Lumiaina Street and Kamehameha Highway on Tuesday, June 16, from 8:30 a.m. to 3 p.m. Crews will install new traffic signals and introduce a new lane configuration which is part of the Lumiaina Street Traffic Improvements Project.

As a precaution, motorists should expect periodic 10-15 minute delays where traffic in one direction may be stopped so cranes can safely lift equipment into place without cars driving underneath. There will be two police officers in the intersection directing traffic while the traffic signal system is down. Motorists are advised to drive with caution and to pay attention to all traffic control signs at the intersection.

The new lane configuration and traffic signals were designed to reduce congestion at the Lumiaina Street and Kamehameha Highway intersection. The project adds a third lane on eastbound Lumiaina Street allowing an extra left turn to Kamehameha Highway. The new lane configuration consists of a far left lane for left turns only, a middle lane for left turns and through traffic, and a far right lane for right turns only. New street lights, loop detectors and pedestrian push buttons were also installed.

HDOT urges drivers to allow for extra travel time and to drive safely while familiarizing themselves with the new traffic signal sequence and lane configurations. HDOT thanks the community for their cooperation while we work to improve Hawaii’s roadways. 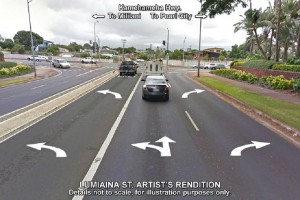 A new left-turn-only lane has been installed to reduce congestion on Lumiaina Street approaching the Kamehameha Highway intersection.  Motorists are asked to drive with caution while getting familiar with the new lane pattern.