The new Airport Access Road connects Hana Highway to Lanui Loop. The improvements will help relieve traffic congestion on Dairy Road, which is the only roadway that leads to the airport from south Maui via Puunene Avenue and west Maui via Kuihelani Highway. All of this traffic travels on Dairy Road and mixes with the airport bound traffic. The new Access Road will help separate the airport users from the local community.

“The new Kahului Airport Access Road is only a half mile long, but it will go a long way in saving people time. Drivers will notice the positive impact right away,” said Ford Fuchigami, Hawaii Department of Transportation Director. “The project blends with Governor David Ige’s initiative to find solutions that improve traffic conditions around the state.”

The Airport Access Road includes a divided roadway approximately half a mile in length with two lanes in both directions, retaining walls, grade separation structures, drainage system, landscape and irrigation system, roadway signage and landscape accent lighting. Cascading waterfalls greet people as they drive to the airport terminal. The water feature elements are dual purpose, to enhance the beauty of the area and serve as an irrigation reservoir with non-potable water for landscaped areas. The reservoir contains nearly 140,000 gallons of non-potable water. Funding for the water feature was provided by the rental car customer facility charge and not state tax dollars. The reservoir also means more potable water will be available for the community.

The current entrance to the general public parking lot will also be closed and a new entrance located on the north side of the parking lot (across from the baggage claim) will be opened (see map 2 attachment).

The construction cost is approximately $56 million, and is fully funded by the rental car customer facility charges collected by rental car companies at the airports, and not the Hawaii Department of Transportation.

The improvements coincide with the current construction on the new Consolidated Rent-A-Car (Conrac) facility at Kahului Airport. The new Conrac will also add functionality and efficiency while helping reduce the airports overall carbon footprint. Currently all vehicular traffic entering the airport must pass in front of the terminal building due to the one-way loop road configuration, including those returning rental cars. The improvements will allow rental car customers to bypass the airport loop road which will improve the flow of traffic in front of the airport terminal building. For more information on the Conrac project please visit the following link: 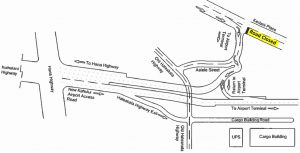 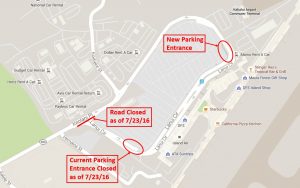 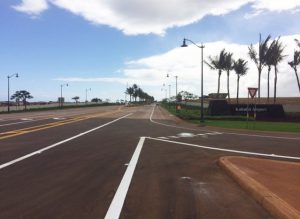 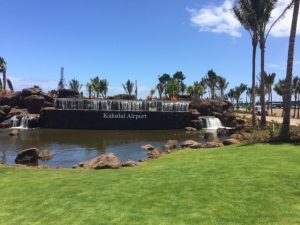 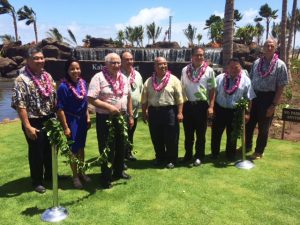