10/10/12 – The state Department of Transportation advises Oahu motorists that the northbound lane of traffic across the bridge will be opened for passenger vehicle traffic only beginning Monday, October 15, from 3 p.m. to 7 p.m., weekdays, for the duration of the project. The DOT urges motorists to use caution and proceed slowly over the bridge. We appreciate the communities’ patience during this time. 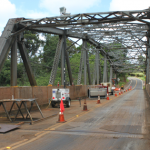 HONOLULU — The state Department of Transportation advises Oahu motorists of a change in the traffic detour for the Karsten Thot Bridge repair work in Wahiawa.  Starting Monday, October 15, the northbound (Haleiwa-bound) lane of traffic across the bridge will be opened for passenger vehicle traffic-only from 3 p.m. until 7 p.m. daily, on Mondays through Fridays.  The southbound (Honolulu-bound) lane will remain open for morning commuters from 5 a.m. until 9 a.m. on weekdays, excluding holidays, for the duration of the project.  The morning and afternoon lanes are open to passenger vehicles, emergency vehicles and school buses only. No city or tour buses or heavy commercial vehicles will be allowed.  Pedestrians will continue to be able to use
dedicated walkway portion on the outside of the bridge.

The afternoon northbound single lane opening is possible because much of the major critical structural work underneath the bridge is nearing completion.  However, structural work on other members continues and further work involving sandblasting and painting below the bridge still needs to be done.  Due to the requirements of the bridge closure, work has progressed well.  Estimates for the project completion date are still within the six-week initial projection.  If work continues as scheduled, DOT anticipates completion by the end of October.

Within the next year, additional work to complete anti-corrosive metal coating of the top of the bridge structure will be done.  This work is anticipated to take place during off-peak traffic times, such as at night or on weekends.  While not considered part of this emergency work, this type of “painting” is important to the integrity and life of the steel structure by reducing and preventing rust and corrosion.

The 80-year-old steel bridge has been closed to vehicular traffic for critical emergency structural repairs that include replacing rivets and repairing and/or replacing steel beams.

During an inspection this past July, it was determined that the bridge needed immediate repairs.  Since that time, a work platform was built underneath the bridge. Crews performed preliminary work and further inspections.  The DOT made the difficult decision to close the bridge completely for safety reasons on Monday, September 17.  Voluntary compliance with the passenger vehicle-only restriction and 10-ton limit was not being consistently followed and presented a danger to the construction workers and motoring public.

Since closing the bridge, DOT engineers have been monitoring and evaluating the traffic situation, listening to community concerns and complaints, and working with the Honolulu Police Department and the area military installations to mitigate the traffic issues.

The DOT appreciates the public’s patience as we continue work to make the Karsten Thot Bridge safe for all drivers as quickly as possible.  Thank you for your patience and understanding.

New steel plates are being installed during repair work beneath the bridge deck to provide additional structural reinforcement.  Approximately 4,000 rivets are being removed and replaced with steel bolts.