HONOLULU – Governor Neil Abercrombie and the state Department of Transportation (DOT) kicked off Hawaii’s 4th annual Pedestrian Safety Month today with a proclamation signing at the state capitol. DOT’s Walk Wise Hawaii program is bringing together public partners such as the City & County of Honolulu’s Department of Transportation Services and all four county police departments, in addition to private partners such as AAA-Hawaii, Kamaaina Kids and McDonald’s Restaurants of Hawaii. Together, they will promote and educate residents and visitors on pedestrian safety and driver awareness of pedestrians throughout the month.

“The number one reason for pedestrian fatalities is inattentive behavior on both the part of the pedestrian and the driver,” Gov. Abercrombie said. “Hawaii is the only state to have a Pedestrian Safety Month and this is our opportunity to lead the nation in pedestrian safety education and to help change pedestrian habits, as well as driver awareness of pedestrians.” 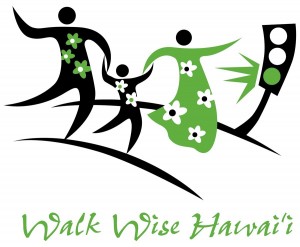 “The goal of the state’s Walk Wise Hawaii program is to create heightened awareness of pedestrian safety with the ultimate goal of saving lives and making Hawaii a safer place to walk,” stated Glenn Okimoto, director of the Hawaii Department of Transportation. Since its inception in 2003, pedestrian fatalities statewide have declined by 48-percent, but with a recent rise in fatalities, we must continue to be vigilant.”

“After learning seven pedestrian safety tips during the school year, each Kamaaina Kid was asked to share this information with his or her family members in the form of the Kupuna Pledge Card,” said Ray Sanborn, founder of Kamaaina Kids. “Each kupuna or parent was asked to sign the card and pledge to their son or daughter to be a good pedestrian. Once signed, every pledge card was redeemable for a complimentary McDonald’s of Hawaii Happy Meal.”

In addition, each Kamaaina Kid was asked to create a pedestrian safety poster based on one of two key pedestrian safety tips: (1) always make eye contact with drivers while in a crosswalk; and (2) always wear bright or reflective clothing while walking at night. More than 4,000 posters statewide were submitted and the top 20 posters are on display at the state capitol throughout August. The top two posters, one from each category, will be printed on McDonald’s Restaurant of Hawaii tray liners at 75 locations throughout the state during the month of August. It is expected that over half a million McDonald’s of Hawaii customers will be exposed to this messaging.

The following Pedestrian Safety Month campaigns and events are slated for August:

For more information on Walk Wise Hawaii and a list of specific Pedestrian Safety Month events, call (808) 587-2160 or visit www.facebook.com/Walk-Wise-Hawaii.

Walk Wise Hawaii is a public education program focusing on pedestrian safety and driver awareness. It is sponsored by the Hawaii State Department of Transportation through its “Safe Communities” program with funding from the National Highway Traffic Safety Administration (NHTSA). Walk Wise Hawaii has employed extensive outreach methods including partnerships with public and private entities. 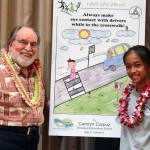 Gov. Abercrombie and Makalapa Elementary 6th grader Camryn Corpuz, Age 11.
Camryn’s poster was the top selection emphasizing the safety message that pedestrians should always make eye contact with drivers while in a crosswalk.