The project will add a dedicated left-turn lane on Lumiaina Street in the eastbound direction, turning onto the northbound lanes of Kamehameha Highway towards Mililani.  Traffic signals will be modified to provide a left-turn green arrow for these lanes.

“Currently, competing with Waikele-bound traffic and pedestrians in the crosswalk, these left turns can be limited to just a few vehicles per green light, backing up traffic coming from the busy Waikele Premium Outlets,” said Ford Fuchigami, HDOT Director.  “The new dedicated turn lane will help to move more Mililani-bound vehicles through the intersection with each green light cycle and reduce traffic congestion.”

Work will be scheduled on Mondays through Fridays from 8:30 a.m. to 3 p.m., daily, excluding holidays.  Construction will begin on Monday, Jan. 5, with preparation work for the removal of the existing median to create space for the new turn lane.  The left eastbound lane will be closed during work hours between Lumiauau Street and Kamehameha Highway, but traffic across and onto Kamehameha Highway will still be allowed.  The project is anticipated to last six months with completion in June of 2015 at an approximate cost of $826,000.

The HDOT urges drivers to allow for extra travel time and to drive slowly and safely through the work zone area. 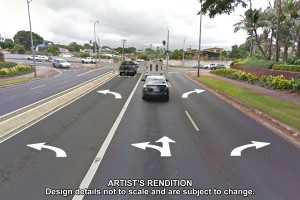 Upon completion, the new left-turn lane on Lumiaina St. will allow two lanes to turn onto Kamehameha Hwy. towards Mililani instead of only one, as seen in this artist’s rendition.  Traffic signals will be modified to allow for the left-turn movement.