During the event, HDOT unveiled a new state-of-the-art simulator that allows drivers to go through various scenarios and experience the consequences of distracted driving, including crashing into objects, other vehicles and pedestrians. The only simulator of its kind in Hawaii, the realistic digital simulation system uses a high-tech set of goggles and rotating turntables connected to a car. It will be used in school presentations and local safety fairs around the state and throughout the year.

“Distracted driving is a real problem on our roadways,” HDOT Director Ford Fuchigami said. “Too many people think it’s okay to text, talk on the phone or play with their mobile devices while driving, but doing so may lead to real consequences and unnecessary tragedies. Unlike the simulator, you can’t just hit the reset button in real life.”

According to the National Highway Traffic Safety Administration, drivers who use hand-held devices while driving are four times more likely to get into crashes serious enough to injure themselves or others. In 2013, there were 3,154 people killed and 424,000 people injured nationwide in motor vehicle crashes involving distracted drivers. Additional research shows drivers in their 20s make up 27 percent of the distracted drivers in fatal crashes, and teens are the most at risk, as drivers under the age of 20 text more than any other age group.

To reach the younger audiences, HDOT hosted a competition for students from the University of Hawaii at Manoa’s Department of Communications and the Academy for Creative Media. Students were invited to submit original concepts and scripts for a new public service announcement (PSA) focusing on distracted driving.

The winner of the contest, Haruna Yamanaka, was presented with a $500 check from Toyota Hawaii during today’s event. Her winning concept and script will be professionally produced and broadcast on television and in movie theaters statewide later this summer.

“We received an impressive number of submissions for the PSA contest,” Fuchigami said. “Our goal in working with UH students was to have the age group most affected by these tragedies create a powerful and relatable message for their peers. We are very happy with the results and are excited to share Ms. Yamanaka’s PSA with everyone this summer.”

Hawaii’s law bans the use of hand-held mobile electronic devices while operating a motor vehicle. This includes, but is not limited to, cellular phones, mp3 players, personal digital assistants, navigation devices and electronic tablets. Drivers under the age of 18 are further banned completely from talking on cell phones, even while using hands-free devices. The fine for violating this law starts at $257, with higher fines in school/construction zones.

During federal fiscal year 2014, the county police departments issued over 11,000 distracted driving citations statewide, indicating that this is a pervasive and serious problem.

“While anything that takes your eyes off of the road, hands off of the wheel, or mind off of the task of driving is a hazard, there is a heightened concern about the risks of texting while driving because it combines all three types of distraction – visual, manual and cognitive,” Fuchigami said. “It’s best to turn off your phone or mobile electronic device and put it in the trunk, glove compartment or back seat where you won’t be tempted to look at it or use it.”

For more information about the dangers of distracted driving, please visit www.distraction.gov. 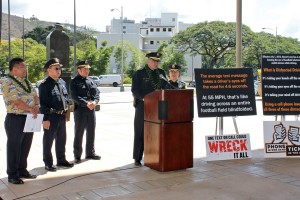 HPD Chief of Police Louis Kealoha addresses the dangers of Distracted Driving and the penalties for violations. 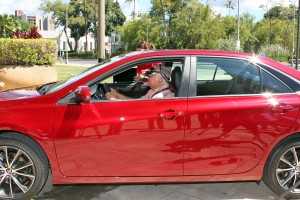 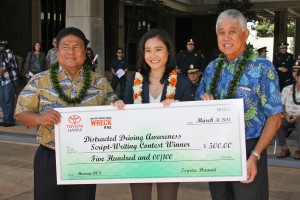 HDOT hosted a competition for students from UH Manoa’s Dept. of Communications and the Academy for Creative Media. Students submitted original concepts and scripts for a new public service announcement (PSA) focusing on distracted driving.  Contest winner Haruna Yamanaka (center) was presented with a $500 check by Glenn Inouye of Servco Pacific (right) and HDOT Deputy Director Jade Butay (left) during today’s event. Her winning concept and script will be professionally produced and broadcast on television and in movie theaters statewide later this summer.