HONOLULU – Approximately two people are killed every week in a traffic crash in Hawaii.[1]

It’s a shocking statistic that motivated over 100 government and community stakeholders from traffic safety, law enforcement, judiciary, highway design and data management to work together to develop and implement the Hawaii Strategic Highway Safety Plan (SHSP).  It is a comprehensive five-year plan that prioritizes strategies to focus efforts and resources in eight emphasis areas, such as impaired driving, speeding, pedestrian safety and occupant protection.

Key members of this group, including the Hawaii Department of Transportation (HDOT), Federal Highway Administration, county police departments, the Hawaii State Department of Health and other traffic safety partners, gathered at the State Capitol today to remember the victims of fatal traffic crashes and unveil the SHSP as their solution to these preventable deaths and serious injuries.

A total of 535 flags bearing the SHSP logo were placed on the Capitol lawn to represent each life lost in a traffic crash from 2010 through 2014.  They are a visual reminder of how many people would still be here today if not for a careless error.

“We have all heard stories of people dying because they chose not to wear their seat belts, or people who were killed by drivers who were intoxicated, speeding or distracted,” Governor David Ige said.  “A lot of these victims were just in the wrong place at the wrong time and paid the ultimate price for someone else’s mistake.”

“In addition to the pain felt by the victims’ families and friends, there are economic costs to taxpayers, as well,” Ige said.  “The cost of traffic crashes in Hawaii is $73,059 every hour.  That’s $1.8 million a day and $640 million a year.

“Because of all of these impacts on the people of Hawaii, we fully support the SHSP and its goal of reducing yearly fatalities from 100 to 80 or fewer by 2018,” Ige added.  “And we encourage all traffic safety advocates to use the SHSP as a guide to effect change on and off Hawaii’s roadways.”

“We are heading in the right direction, but we have a long way to go to reach our ultimate goal of zero deaths,” HDOT Director Ford Fuchigami said.  “The valued work of our traffic safety partners, such as the police departments’ enforcement efforts play an essential role in changing behaviors and making a difference toward our vision of having all Hawaii’s road users arrive safely at their destinations.”

At the event, HDOT and the four county police departments also launched the annual “Click It or Ticket” campaign, which started on May 11 and runs through May 25.  Police statewide will be strictly enforcing Hawaii’s seat belt and child restraint laws during the national mobilization and throughout the year, day and night.

To download a copy of the Hawaii SHSP, please visit www.hawaiishsp.com. 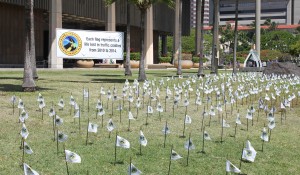 Displayed on the state capitol lawn, 535 flags represent each life lost to a traffic accident from 2010 through 2014 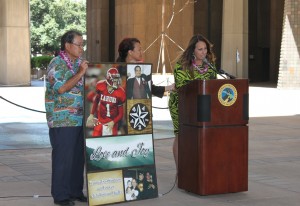 Karlotta Carvalho, advocate for highway safety, shares the story of losing her son who was killed by the acts of a drunk driver