HONOLULU — The Hawaii Department of Transportation (HDOT), in conjunction with the Nisei Veterans Legacy (NVL), is proud to unveil the new permanent exhibit celebrating the Nisei veterans of World War II. The unveiling was commemorated with a ceremony today at the exhibit site located at the Honolulu International Airport in the makai end of the Interisland Terminal near gate 56.

The exhibit was produced by volunteers from the Nisei Veterans Legacy, a nonprofit organization created to preserve and perpetuate the legacy of the Americans of Japanese Ancestry who served in the United States armed forces during World War II, including the 100th Infantry Battalion, 442nd Regimental Combat Team, Military Intelligence Service and 1399th Engineer Construction Battalion.

“The Japanese American soldiers fought two battles during the war: the Axis enemies in Europe, Asia, and the Pacific and domestic racism and suspicion at home,” said Wes Deguchi, Nisei Veterans Legacy President. “This exhibit will expose millions of travelers, not only from our country but overseas as well, to the heroism and achievements of these veterans. Very few of them are still with us to tell their stories in their own words, so it was our goal that this exhibit and the work of the NVL tell of their sacrifices for Hawaii, our nation, and the world. We’re very grateful to the Hawaii Department of Transportation for this opportunity and to our volunteers for their time and creativity.”

Funding for the exhibit was provided in part by a grant from the Hawaii State Legislature for the construction of the display cabinet. The contents were produced or donated by the NVL.

Nisei stands for second generation and represents American citizens born in the United States whose parents immigrated from Japan. More information on the Nisei Veterans Legacy can be found by visiting https://www.nvlchawaii.org/ 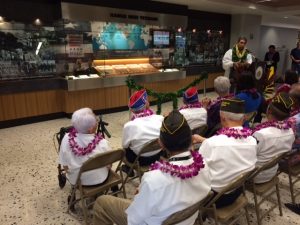 The distinguished veterans watch as the new Hawaii Nisei Veterans exhibit at the Honolulu International Airport is blessed by Kahu Wendell Davis. 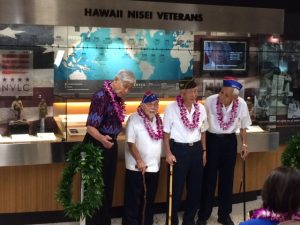