HONOLULU – The Hawaii Department of Transportation (HDOT) and the Federal Highway Administration (FHWA) are pleased to announce the completion of the Halona Street Bridge replacement project on time and within budget nine months after construction began. Governor David Ige was joined by federal and state officials in a blessing ceremony today to celebrate the opening of the new bridge and road.

“This project is a result of positive coordination between federal and state agencies working together for a common goal of improving transportation infrastructure,” said Gov. David Ige. “We are proud to be working with the FHWA on a dozen additional projects that will benefit Hawaii’s residents and visitors across the state.”

The improvement project is an example of positive collaboration between Federal and State government. The project cost to replace the structurally deficient bridge was $7.2 million, 80 percent of which was provided by federal funding and 20 percent from HDOT Highways Division revenue.

The bridge was originally built in 1938. Construction began January 2017. Project highlights included replacing the bridge foundation, pavement and railings, as well as replacing the water and gas lines beneath the bridge, all of which improve the safety and reliability of the structure.

Halona Street has reopened for use connecting North Vineyard Boulevard to Houghtailing Street. We thank all the residents who live near the construction site and along the detour route for their patience as crews worked on the necessary improvements.

For more information on the Halona Street Bridge project or the additional bridge and highway improvement projects being delivered through the federal and state partnership, please visit https://flh.fhwa.dot.gov/projects/hi/hidot/ 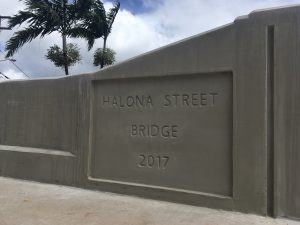 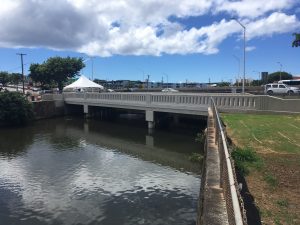 View of the Halona Street Bridge from Kohou Street 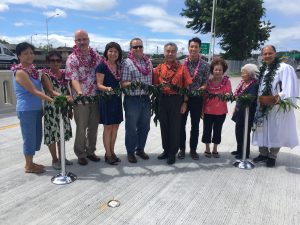