HONOLULU – The Hawaii Department of Transportation (HDOT) releases statewide traffic fatality data to inform the public of the current fatality numbers in an effort to reduce our state’s motorist, bicyclist, and pedestrian numbers toward the goal of zero deaths. 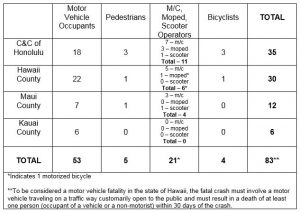 HDOT urges motorists and pedestrians to do their part towards reducing preventable deaths on Hawaii roadways by educating themselves on safe driving and walking practices. In 2016, speeding, alcohol and/or drug impaired, and distracted driving contributed to many of the 120 preventable deaths on Hawaii’s public roads. More information can be found through HDOT’s Safe Communities Program.

Please help prevent Hawaii’s next traffic fatality by driving sober, aware, and according to the laws of the road.