HONOLULU – The Hawaii Department of Transportation (HDOT) is pleased to welcome the new China Airlines Airbus A350 aircraft to the Daniel K. Inouye International Airport (HNL). The aircraft is featured on the Honolulu-Taipei direct route that began Oct. 29, 2017. A blessing ceremony celebrated the inaugural flight prior to its departure.

“We thank China Airlines for its commitment to Hawaii and the environment by bringing a plane that uses less fossil fuel and is more environmentally friendly,” said Governor David Ige. “Nearly 13,000 visitors from Taiwan traveled to Hawaii from January to August of 2017 and this new aircraft delivers a high quality of service for the passengers.”

“This new beginning features an aircraft that truly reflects the quality of China Airlines and our commitment to delivering the best possible service to our passengers,” said Chairman of China Airlines, Mr. Nuan-Hsuan Ho. “The Honolulu to Taipei route has proven to be consistently strong, with increasing demand from our customers year after year. The strength of this route has provided opportunities for China Airlines to enhance our service by acquiring the new aircraft and growing our service all while supporting this airport in creating a sustainable gateway between Asia and the Americas.”

The latest addition means that all North American destinations including Los Angeles, New York and San Francisco will now be flown by new 777 or A350 aircraft, a new milestone for the NexGen strategy. China Airlines has unveiled a number of aircraft such as the “A350 Syrmaticus Mikado” and “Buddy Bears” to demonstrate its support for environmental protection. The A350 is the quietest among the aircraft types in its class and is 25 percent more fuel efficient, while offering additional space and amenities for passengers. The aircraft also serves to promote the culture of Taiwan to Hawaii residents.

China Airlines is now operating the non-stop flight between Honolulu and Taipei with the A350 aircraft every Wednesday and Sunday. 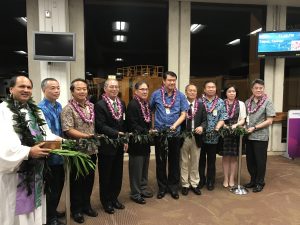 Kahu Kordell Kekoa (left) performed a blessing ceremony with HDOT and China Airlines officials prior to the new Airbus A350 inaugural flight at the Daniel K. Inouye International Airport.