HONOLULU – The Hawaii Department of Transportation (HDOT) Highways Division, Oahu District Storm Water Management Program (SWMP) has received the Silver Award from the American Marketing Association’s Marketer of the Year Awards for the Trash Free Hawaii Public Service Announcements (PSA) that delivered compelling messages regarding the importance of preventing litter and keeping the environment and our water clean.

The Trash Free Hawaii campaign took an artistic approach with two thirty second PSAs. One is titled “Bittersweet Symphony” and showcases the ocean’s beauty and the importance in keeping it trash free, and the other titled “Time Matters” shows it takes just seconds to throw rubbish in a trash can. Both PSAs were professionally created by MVNP.

“Hawaii is one of the most beautiful places in the world and we want to keep it that way. Littering isn’t showing the aloha spirit. It is disrespectful and damages our environment,” said Jade Butay, Hawaii Department of Transportation Director. “We all need to do our part to properly throw trash in the trash can, and if there isn’t a garbage can nearby, hold on to it until you find one. It isn’t difficult.”

The PSAs may be viewed on the Highways Division, Oahu District’s storm water websites at www.stormwaterhawaii.com and www.trashfreehawaii.com

Congratulations again to the HDOT Highways Division, Oahu District Storm Water Management Program on receiving the Silver Award and for producing a positive and influential message to our community. 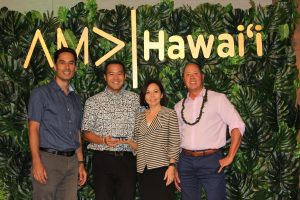 About the Storm Water Management Program

The State of Hawaii Department of Transportation, Highways Division, Oahu District is responsible for the implementation of the Storm Water Management Program. This initiative is undertaken to comply with the National Pollutant Discharge Elimination System (NPDES) Permit for the Oahu municipal separate storm sewer system (MS4). The Oahu MS4 qualifies as a large municipal separate storm sewer system since it services a population greater than 250,000 and is therefore subject to permitting requirements under the NPDES Program for storm water discharges. The program is designed to reduce, to the maximum extent practicable, the amount of storm water containing pollutants from entering and ultimately discharging from the MS4 into the streams, rivers and ocean that we all enjoy. For more information, visit www.stormwaterhawaii.com and www.trashfreehawaii.com