HONOLULU – The Hawaii Department of Transportation (HDOT) was pleased to host an electric bus demonstration at the Iolani Palace Parking Lot Wednesday, April 11, 2018. The demonstration involved BYD Company Ltd, the world’s largest electric vehicle manufacturer and Proterra, Inc., which has tested its zero-emissions electric battery buses on Oahu and Maui. Buses from both manufacturers will be considered, among other alternative energy vehicles, as passenger shuttles between the terminal and the rental car facility at the Daniel K. Inouye International Airport later this year.

“I strongly support initiatives that bring us closer to reaching our sustainable energy goals,” said Governor David Ige. “The use of alternative energy vehicles on Hawaii roads and at our state’s busiest airport is a step in the right direction.”

HDOT Director Jade Butay presented the buses and was joined by the Governor, who spoke on the state’s clean energy goals. County of Kauai Mayor Bernard Carvalho and Jon Nouchi, the Deputy Director for the City and County of Honolulu’s Department of Transportation Services, updated those gathered on their renewable ground transportation goals.

“It is imperative that our state is an early adopter of electric buses, as it will move the whole community in a positive direction and reduce fossil fuel dependence,” said Kauai Mayor Bernard Carvalho. “These changes we are taking on are not easy, and they will take collaboration with everyone, but together, we can make a better Hawaii.”

“Electric vehicles of all kinds are coming. We predict that by 2045 half of light duty vehicles will be electric but we see the greatest momentum in electric buses here in Hawaii so it is great to see a showcase of what clean transportation can look like,” said Brennon Morioka, Hawaiian Electric electrification of transportation general manager. “This trend will save everyone money – even if you don’t drive an EV or ride an electric bus or the train. Just as important, electrification of transportation will help us get to 100% renewables, reduce our dependency on imported oil, and reduce greenhouse gas emissions. This can really be a win-win-win for everyone.”

“As an island state it’s critical for us to cohesively focus on reducing the use of imported fossil fuels,” said HDOT Director Jade Butay. “I thank Governor Ige for his leadership in the transfer to clean, renewable energy sources, and those that were able to make it here today to see firsthand what the future of ground transportation could look like.” 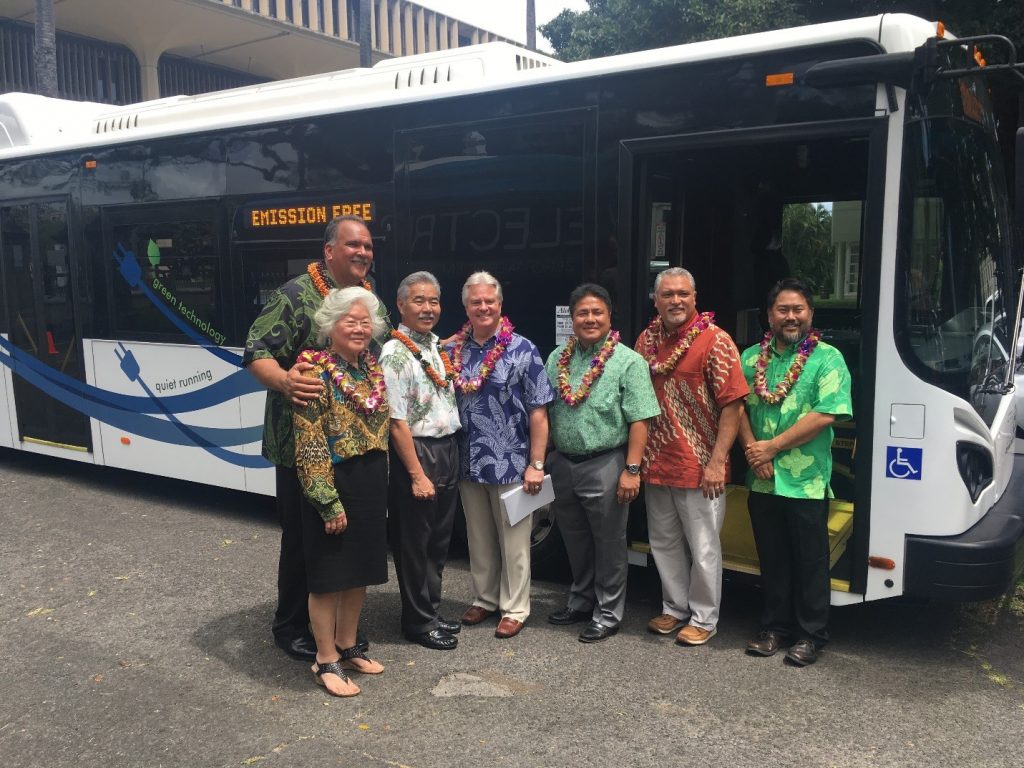 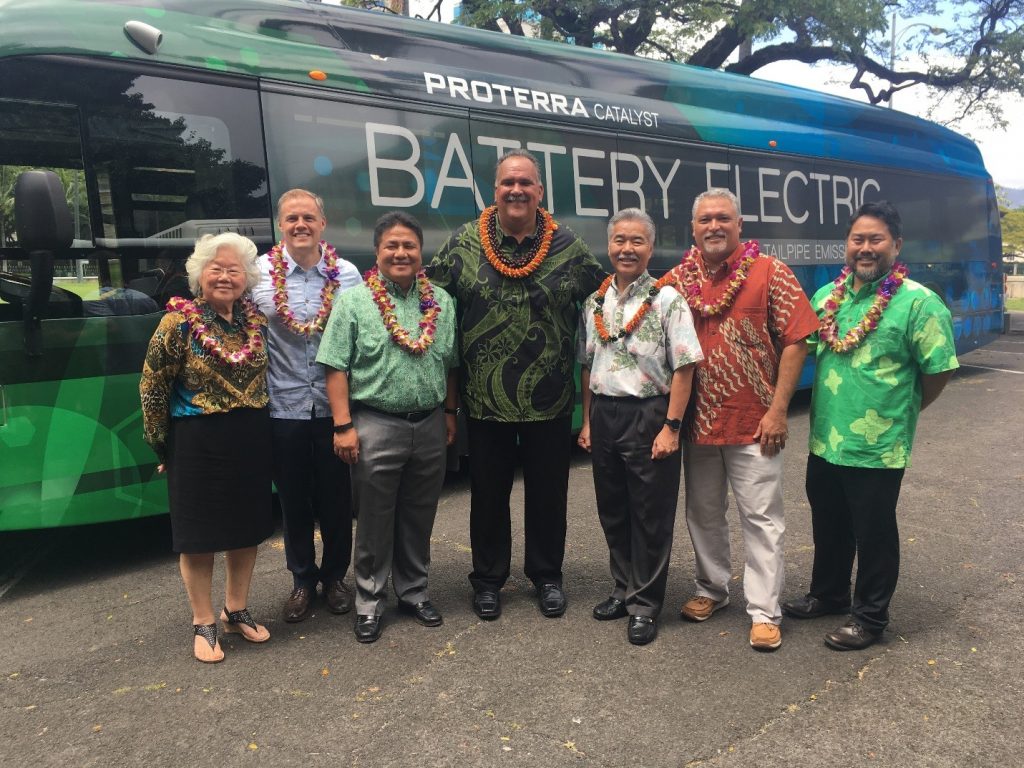 About BYD
The Official Sponsor of Mother Nature™, BYD is the world’s largest manufacturer of electric vehicles and the overwhelming global leader in battery-electric buses with nearly 40,000 buses in service across North America, South America, Asia and Europe. BYD is also an industry leader in several other high-tech sectors, including high-efficiency automobiles, medium- and heavy-duty trucks, electric forklifts, energy storage and solar power generation. BYD is also one of the world’s largest manufacturers of rechargeable batteries. BYD is a publicly traded company with 60% of its stocks owned by U.S. investors. Warren Buffett’s Berkshire Hathaway is the largest single shareholder at 9.9%.

About Proterra
Proterra is a leader in the design and manufacture of zero-emission heavy-duty vehicles, enabling bus fleet operators to significantly reduce operating costs while delivering clean, quiet transportation to local communities across North America. With more than 546 vehicles sold to 67 different municipal, university, airport, federal and commercial transit agencies in 30 states, Proterra is committed to providing state of the art, high performance vehicles to meet today’s growing market demand. The company’s configurable Catalyst platform is capable of serving the full daily mileage needs of nearly every transit route on a single charge. With unmatched durability and energy efficiency based on rigorous U.S. certification testing, Proterra products are proudly designed, engineered and manufactured in America, with offices in Silicon Valley, South Carolina, and Los Angeles. For more information, visit: https://www.proterra.com and follow us on Twitter @Proterra_Inc.