HONOLULU – The Hawaii Department of Transportation (HDOT) hosted a naming and blessing ceremony for its newly designated Marine Highway Monday, July 9, 2018, at Pier 38 at Honolulu Harbor.

Lauren Brand, a representative of the Maritime Administration (MARAD) of the U.S. Department of Transportation, presented to Governor David Ige a certificate officially designating the waters around and between the Hawaiian Islands as Marine Highway “MH-1.”  This is the state’s first Marine Highway designation and it enables HDOT’s participation in America’s Marine Highways program which provides federal resources to increase operation efficiency in moving cargo through the State’s commercial harbors.

“It is an honor to support this collaborative initiative between MARAD and the HDOT Harbors Division, and to acknowledge that this Marine Highway is Hawaii’s lifeline. This designation, awarded by Secretary of Transportation Elaine L. Chao, complements the ongoing Harbors Modernization Plan,” said Lauren Brand, MARAD’s Associate Administrator for the Office of Ports & Waterways.

In addition to commemorating the designation, Governor Ige and HDOT leaders announced the official name of the new route: The Daniel K. Akaka Marine Highway. “It is a great privilege to honor Senator Akaka and know his service to the people of our State will continue as the Daniel K. Akaka Marine Highway benefits and enhances the port system we all depend on,” concluded Gov. Ige.

This naming honors Senator Akaka for his many years as an upstanding public servant to the people of Hawaii, his long-standing support of Hawaii’s maritime industry, and the time he spent working in Honolulu Harbor building the pier infrastructure during his service in the U.S. Army Corps of Engineers in the 1940s.

HDOT applied for the designation in December 2016 and received approval of its application from MARAD in March 2018. The official naming and blessing was coordinated with the family of the late Senator Akaka.

About MARAD
The Maritime Administration is the agency within the U.S. Department of Transportation dealing with waterborne transportation. Its programs promote the use of waterborne transportation and its seamless integration with other segments of the transportation system, and the viability of the U.S. merchant marine. The Maritime Administration works in many areas involving ships and shipping, shipbuilding, port operations, vessel operations, national security, environment, and safety. The Maritime Administration is also charged with maintaining the health of the merchant marine, since commercial mariners, vessels, and intermodal facilities are vital for supporting national security, and so the agency provides support and information for current mariners, extensive support for educating future mariners, and programs to educate America’s young people about the vital role the maritime industry plays in the lives of all Americans. 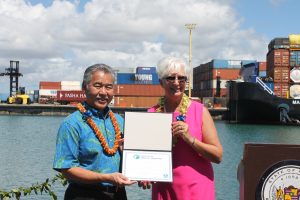 Lauren Brand, Associate Administrator for the Office of Ports & Waterways with the Maritime Administration, presents Governor David Y. Ige with a certificate officially designating the waters around and between the Hawaiian Islands as Marine Highway “MH-1.” 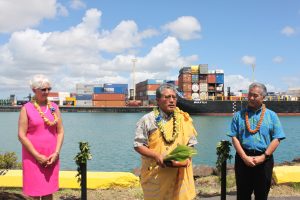 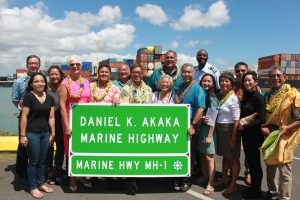