HONOLULU – Gov. David Ige and the Hawaii Department of Transportation (HDOT) announced an alternative energy pilot busing program at the Daniel K. International Airport (HNL) will begin September 1, 2018. The pilot program will involve a yearlong trial of alternative energy buses as shuttles between HNL terminals and the interim Consolidated Rent-A-Car (ConRAC) facility and will result in the selection of a clean energy technology for HNL’s permanent rental car shuttle fleet.

“Hawaii is committed to making a clean energy transformation. As an island state at risk of rising sea levels and climate change, we can’t afford not to be. While the federal government is attempting to roll back emissions standards, we are proud to surge ahead with the largest renewable airport bus fleet program in the nation,” said Gov. David Ige.

HDOT Airports Division staff and consultants will weigh factors such as cost to buy or lease the buses, operation cost, maintenance cost, environmental impacts, and long-term feasibility to make a selection between electric buses and buses powered by Compressed Natural Gas (CNG). The selected alternative energy buses will replace the current fleet of diesel and gasoline powered buses and will begin running to the permanent ConRAC facility in 2021.

The consolidation of rental car companies at the interim ConRAC has already reduced the number of buses and transportation emissions generated at Hawaii’s busiest airport. The pilot program adds to energy savings initiatives at state airports such as the replacement of over 98,000 lighting fixtures at airports statewide and the installation of 4,260 solar modules on the roof of HNL’s Terminal 1 parking structure.

Hawaii Gas, Hawaiian Electric, Roberts Hawaii, Ricando, and the rental car companies are participating in the one-year pilot program at an approximate cost of $3 million including lease of four 28-passenger buses, labor, bus operations and maintenance. 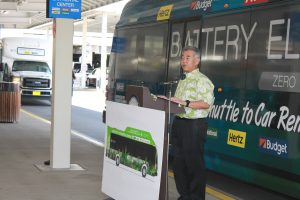 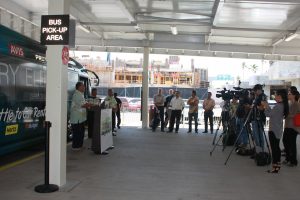 Hawaiian Electric’s General Manager for Electrification of Transportation, Brennon Morioka, talks about making a dent in oil imports for transportation through the pilot program. 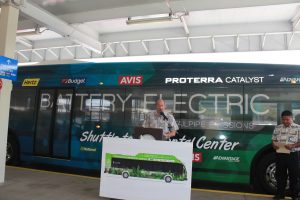 The Vice President of Business Development for Hawaii Gas, Aaron Kirk, delivers remarks on CNG as a clean energy alternative.