HONOLULU – Governor David Y. Ige and the Hawaii Department of Transportation (HDOT) are pleased to announce a new and improved Zipmobile is on Oahu and is anticipated to be deployed into service in November. The custom machine was built in Rio Vista, California by Lindsay Transportation Solutions at a cost of $1,953,000.

The new machine will replace one of the two current Zipmobiles, which have both been in service for more than 20 years. One of the machines will be kept active as a backup machine. Parts will be salvaged from the other machine and stored in case they are needed.

The barrier moving machine transfer width can extend up to 30 feet, which is six feet longer than the current machines, which provides more flexibility on barrier location and improves safety with a wider shoulder area in certain sections of the route.

With a Tier 4 diesel engine the new Zipmobile is more environmentally friendly as it produces 96 percent fewer pollutants, such as nitrogen oxide and particulate emissions, than the previous machines. A Tier 4 engine is the most advanced diesel technology available today.

HDOT thanks the U.S. Environmental Protection Agency (EPA) and the Hawaii Department of Health (DOH) for assisting with a grant under the federal Diesel Emissions Reduction Act (DERA) of 2010, to replace older, higher emission diesel vehicles, with newer and cleaner vehicles. Through the grant, the DOH will provide nearly $390,000 for the new vehicle, bringing the total cost to HDOT down to $1,563,000.

“The Zipmobile is an important piece of equipment that adds two additional eastbound lanes on the H-1 Freeway during the morning commute and helps ease traffic conditions for both carpool and single occupant vehicles,” said Governor David Ige. “We thank the EPA and DOH for helping secure a cleaner and more efficient Zipmobile.”

The new machine will be tested in the overnight hours to limit the impact on the traveling public. Zip U There mechanics contracted to operate and maintain the Zipmobiles have been trained on the new vehicle and software, both at the manufacturer’s facility in California and on Oahu. Engineers and technicians with the manufacturer are on island during the initial installation and transition. They will continue to be available on call as needed. The vehicle has a full one-year warranty on all parts.

HDOT created the Zipper Lane in 1998 and expanded it into a second lane in August 2016, which boosted usage by more than 40 percent, increased the average speed from 45mph to 50mph and decreased the number of vehicles in the single occupancy vehicle lanes by approximately 2,300. The Zipper Lanes are open weekdays, excluding most holidays, from 5:30 – 9 a.m. It begins on the H-1 Freeway at the Managers Drive Overpass near Waikele and feeds into the Nimitz Highway Express Lane. The Zipper Lanes are open to vehicles carrying two or more occupants, motorcycles and electric vehicles with an EV license plate.

There are currently three entrances and two exits throughout the 11.3-mile route. The fourth entrance near the Radford Drive overpass was closed when the additional lane was created. HDOT has determined it is not feasible to safely reopen the fourth entrance. Carpool vehicles are still able to use the HOV lane on the Airport Viaduct and the Nimitz Express Lane offramp.

Photos and videos of the new and old Zipmobiles are available for viewing and publication. Please courtesy “HDOT” or “Hawaii Department of Transportation” if the material is used. Do not drop the “H” or “Hawaii” from the courtesy. To view the photos and videos click here.

How long is the Zipper Lane route?
The Zipper Lane is 11.3 miles in length and begins on the H-1 Freeway at the Managers Drive Overpass near Waikele and feeds into the Nimitz Highway Express Lane.

How fast is the Zipmobile?
The Zipmobile has a top speed of approximately 15 mph, but it does not travel at that pace when transferring the barrier.

How many workers are on-board the Zipmobile during operations?
Two employees operate the Zipmobile at a time, one in front and one in the back of the vehicle.

Who is the current contractor?
Zip U There has been operating and maintaining the Zipmobile contract since May 2014.

Are the employees based in Hawaii trained in maintaining the vehicle and troubleshooting the computer software programs? What contingencies are in place should there be a malfunction like the one on March 31, 2015?
The Zipper Lane is a positive feature that improves traffic flow during the daily morning commute and we are aware of the impact if there is a malfunction. The new Zipmobile brings enhanced features and reliability and comes with a full one year warranty on all parts. Six employees and engineers with the manufacturer, Lindsay Transportation Solutions, are on island helping ensure a smooth transition. Zip U There mechanics have been trained at the manufacturer’s facility in California and have received additional training in Hawaii. Lindsay Transportation Services engineers are on-call 24/7 and will make frequent return visits to Hawaii during the first year of operation. One old Zipmobile will be retained to operate as a backup if necessary. Parts and software will be stored on Oahu and will be available to be swapped out as part of the contigency plan. During the March 2015 incident, the computer software was proprietary so the manufacturer needed to make repairs directly. Since then, Zip U There mechanics have been trained and are able to make software repairs independently and onsite.

When was the new Zipmobile delivered?
The machine arrived in Hawaii September 29, 2018. 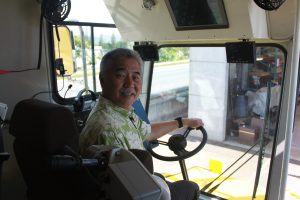 Governor David Ige sits in the driver’s seat of the new Zipmobile. 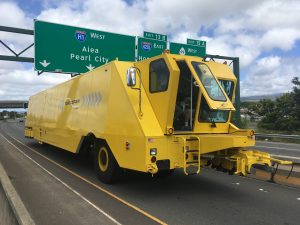 The new and improved Zipmobile brings more reliability, versatility and is better for the environment.