KONA – On what would have been the late Sen. Daniel K. Inouye’s 89th birthday, a highway named in his honor has opened to bridge East and West Hawaii.

The Hawaii Department of Transportation (DOT) today opened the newest section of the former Hawaii Saddle Road, a nine-mile portion from Mile Post 42 to the Mamalahoa Highway (Route 190), which also marked the completion of 41 miles of highway built since the project started construction in 2004.

In honor of Sen. Inouye’s vision and dedication to the project, the 2013 Hawaii Legislature passed Senate Concurrent Resolution 43 to rename the 41-mile upgraded section of Hawaii Saddle Road to the Senator Daniel K. Inouye Highway. Gov. Neil Abercrombie joined members of the Inouye family, former colleagues, and other government officials at the opening and renaming ceremony.

“We have come this far due to the vision Senator Inouye shared with the project’s many partners, including the Saddle Road Task Force, Hawaii Department of Transportation, Federal Highway Administration, and Department of the Army,” Gov. Neil Abercrombie said. “Once one of the most precarious highways in the state, the Senator Daniel K. Inouye Highway is now a safer and more efficient travel route connecting East and West Hawaii communities.”

To date, $290 million dollars has been awarded for construction from federal, state, Department of the Army and other sources.

“During his lifetime, Senator Inouye made incredible contributions to this country and the state of Hawaii, we are honored and pleased that this vital connector for Hawaii Island will carry his name,” said DOT Director Glenn M. Okimoto.

“Needless to say, the incredible improvements to Saddle Road are the result of the vision and steadfastness of Senator Inouye,” said Saddle Road Task Force Co-Chair Walter Kunitake. “His determination never wavered, and it is absolutely fitting that this new roadway be named the Daniel K. Inouye Highway.”

The new segment of the realigned highway will be opened to the public at 3 p.m.

The U.S. Department of the Army constructed the original one-lane Saddle Road in 1942 to provide access to its military training facilities located in the “saddle” between Mauna Loa and Mauna Kea. Over the intervening years, some widening and paving was done, but no significant improvements were made – leaving many of the existing roadway deficiencies uncorrected.

What began as a military access road has since become an important cross-island connection and also provides the only paved access to the Mauna Kea Science Reserve, Pohakuloa Training Area Base, and Mauna Kea State Park, as well as access to public lands and forest areas for hunting, gathering and ranching.

Construction funding for the Saddle Road project has been made possible through the U.S. Department of the Army Defense Access Road and Ecosystem Management Programs, U.S. Congress, and Hawaii Department of Transportation. Construction of the last remaining portion of Saddle Road project on the east side will be completed as funds become available. 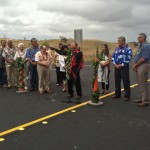 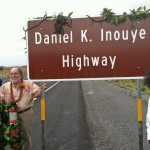