The State of Hawaii Department of Transportation (HDOT) is proposing to construct a shared use pedestrian/bicycle path between Whitmore Village and Wahiawa, specifically Wahiawa Transit Center, as a multimodal connector between the two locations. The purpose of the proposed pedestrian and bicycle path is to create a dedicated non-vehicular facility that would facilitate access between residential land uses at Whitmore Village to places of employment and education in Wahiawa.

Purpose and need for the pathway have come from community priorities and recommendations outlined in long-range community and master plans and community meetings, aimed at:

A survey conducted by HDOT in March of 2020, to gauge interest in the pedestrian bridge by Whitmore Village and Wahiawa communities, reinforces these goals and the project moving forward. HDOT sent survey requests to 4,142 households in Whitmore Village and Wahiawa out of which a total of 345 responses were received. Twenty-two percent of the survey responses were from Whitmore Village residents, 72% were Wahiawa residents, and 6% reside elsewhere. When asked whether the respondent would personally use the proposed shared use path – 36% responded affirmatively, while 53% indicated that they would not. When asked whether the respondent knows of other people who may use the proposed shared use path, 43% of those surveyed indicated that they knew of others who may use the proposed shared use path, while 46% indicated that they did not. When evaluated within the context of the described purpose and need for the project, the large number of affirmative (even if smaller than the negative) responses to HDOT’s survey provide resounding support for the idea that a safe and accessible facility is needed to support the shift from single occupant vehicles to multimodal or alternate modes of transportation.

The shared use path would be accessed from Whitmore Avenue, cross over Kiikii Stream and connect with an existing street or right-of-way owned by the City and County of Honolulu, leading to the Wahiawa Transit Center. The Transit Center was selected as the Wahiawa terminus for the project due to the increased reliance of Whitmore Village residents on public transportation (almost doubling from 7.1% at the end of 2013 to 13.5% at the end of 2017) to access employment and education beyond Wahiawa.

Three build alternatives have been defined based on available budget, traffic and environmental impacts, cultural studies and other social concerns. The alternative routes for the pathway include Palm Street, North Cane Street, and Koa Street. (See map below) 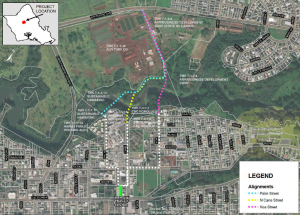 The Palm Street alternative would cross Kiikii Stream in the vicinity of the Hawaii Public Housing Authority Office and connect to Palm Street, which is owned by the City and County of Honolulu. This alternative, which connects Palm Street to Whitmore Avenue, is approximately 0.65 miles long.

The Koa Street alternative would cross Kiikii Stream in the vicinity of Express Copy and connect to Koa Street, which is owned by the City and County of Honolulu. This alternative, from Koa Street to Whitmore Avenue, is approximately 0.46 miles long.

The general distance between Whitmore Village and Wahiawa is currently about 1.5 miles along Whitmore Avenue and Kamehameha Highway; any of the proposed build alternatives would provide a path roughly 1 mile long between the same two travel points. The proposed shared use pedestrian/bicycle path will be 12 feet wide, traversing properties owned by the State of Hawaii and Sustainable Hawaii Inc, with City and County of Honolulu street connections.