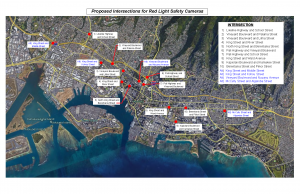 Map showing intersections that will be studied.

Red-light running is a significant cause of crashes, deaths, and injuries at signalized intersections. Statewide, between 2015 and 2020 there have been 1,879 crashes as a result of red-light and other traffic signal violations.